Why are bacteria resistant to antibiotics?

Antibiotics are drugs that fight an infection caused by bacteria by preventing it from growing or reproducing. Antibiotics should therefore only be prescribed to treat infectious diseases of bacterial origin. However, antibiotics are still too often prescribed for viral infections such as flu.

Inappropriate and repeated use of antibiotics causes the body to eliminate sensitive (sometimes non-pathogenic) bacteria and make room for resistant bacteria that can become pathogenic. In other words, the more antibiotics are taken, the bigger the risk of resistant bacteria emerging. Antibiotic treatments then become less effective for the patient.

The overuse of antibiotics in other fields

The repeated use of antibiotics is also very present in the agri-food sector.

In livestock farming, antibiotics were used as growth promoters in the European Union until the practice was banned in 2006. However, this practice continues in other countries, such as the United States. In addition, the overuse of antibiotics persists, particularly in preventive treatment. According to the WHO, at least 50% of the antibiotics produced in the world are used on animals(2). Transmission can thus occur to humans, either directly or through food. 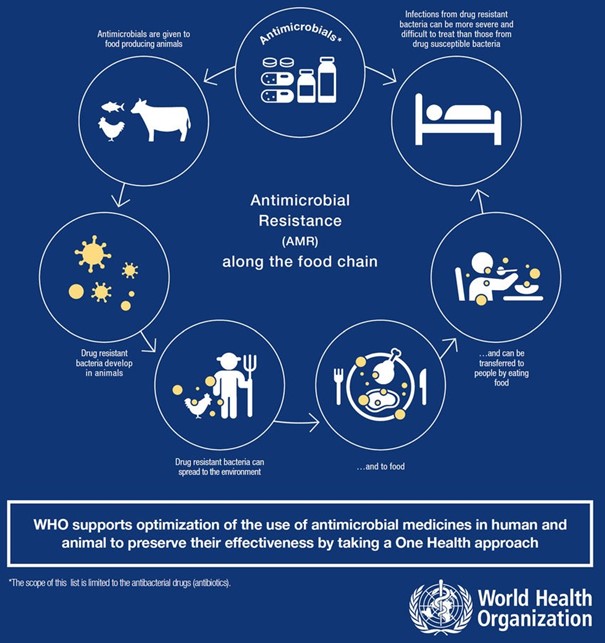 Epidemics of antibiotic-resistant bacteria are multiplying and evolving rapidly over time. Worldwide, the WHO estimates that of the 8-10 million new cases of tuberculosis that occur each year, 440,000 are multi-drug resistant, causing at least 150,000 deaths.(3) In addition, cases of tuberculosis resistant to almost all antibiotics have been reported in many countries.

Why are bacteria resistant to antibiotics?

2.OMS (2001), WHO Global Strategy for Containment of Antimicrobial Resistance.